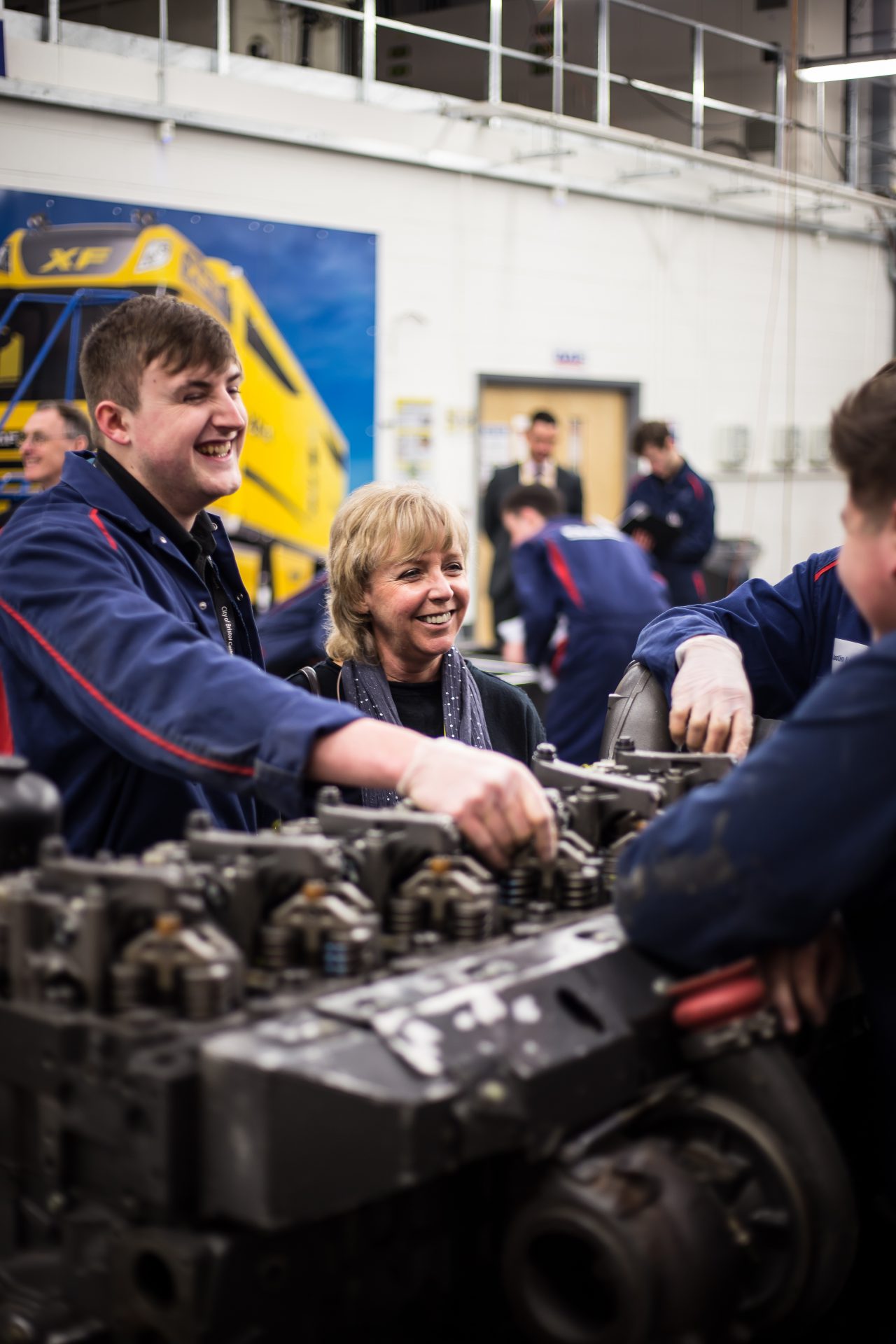 She said: “I’m here to see what DAF is delivering through the College and to see how young people are engaging in the start of their 3-year Apprenticeship. I’d like to look at the ages as I can see it’s quite a breadth of age groups on the course, and I’d also like to see what’s being offered and hear what the Apprentices have got to say.”

Beverly was appointed Traffic Commissioner for the North West of England in 2000, becoming the first female commissioner and, in 2012, she was appointed as Senior Traffic Commissioner for Great Britain. This role gave her the responsibility of providing guidance and direction on a range of matters to commissioners. Among her vast list of titles and accreditations, Beverly is currently a Think Logistics board member, as well as a Fellow and Vice President of the Chartered Institute of Logistics and Transport (CILT) UK, having previously served as President.

During her visit, Beverly was eager to talk with as many Apprentices as she could. She spoke with first year DAF Apprentices in a briefing and walked around the classrooms and workshops where she found second and third year students hard at work, practicing on physical DAF trucks of different models and sizes. She was impressed with how eager Apprentices at the college were to talk with her and how passionately they spoke of their work and what they have learned during their time on the course.

She said: “I think the Centre has a lovely feel to it. I’ve been to quite a few colleges, but this just feels very modern, very open and safe.

“I also like all of the photographs around the centre, of the young people, and I think the message is always better delivered by these young people.

“I love seeing the Apprentices in their uniforms because that gives that sort of corporate identity to them. It’s that feeling of belonging, which I think is really important.”

During her talks with students, Beverly also addressed the issue surrounding the lack of women within the Motor Vehicle industry. She said: “In terms of promoting women in the industry, a lot of women have come in by accident rather than by design. I also think the industry has got to make itself more appealing to females, no matter what age they are, and that’s a real challenge.

“I think employers need to do that but I think it also goes back to education providers and it also goes back to parents. Everybody plays their part and that goes back to somewhat de-mystifying urban myths about the commercial vehicle industry. It’s fascinating, in my talk, I think there was one female and she was the oldest in the group.”

If you would like to find out more about courses and career paths leading to the Commercial Vehicle Industry, visit City of Bristol College during its upcoming Open Event for Engineering and Motor Vehicle courses at AEC & Parkway centres on Tuesday 6 February, 5pm – 7:30pm.