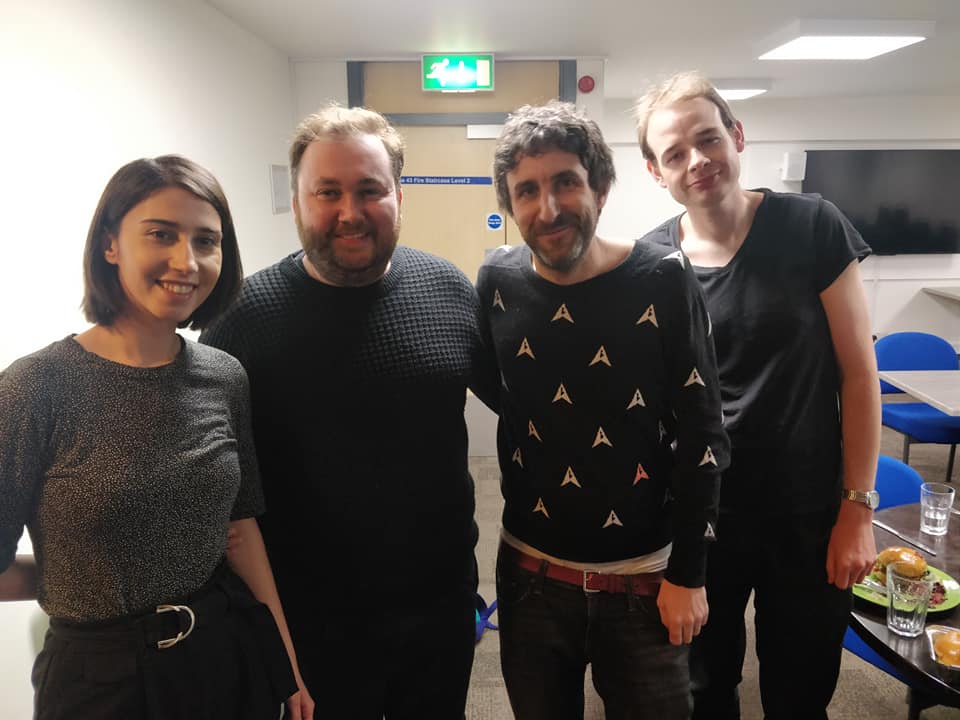 Delicious burgers and hilarious anecdotes dished up at City Restaurant

More than £500 was raised by City of Bristol College’s City Restaurant on Thursday after diners tucked into tasty burgers and were crying with laughter as four funny comedians took to the make-shift stage for the college’s inaugural Belly Laughs event.

City of Bristol College’s Level 2 Food Preparation and Service students and Level 3 Hospitality students served up some mouth-watering burgers under the watchful eye of successful chef and former lecturer Alex Hayes before compere Jeremy Flynn stepped up to the plate for Belly Laughs.

Event co-organiser and lecturer Amy Woodrow teamed up with 8 Out of 10 Cats comedian Mark Olver to bring the charity comedy night to the restaurant at College Green on Thursday last week which raised £550 for the charity.

Belly Laughs is a series of comedy shows which are held in restaurants, cafés and bars across Bristol in a bid to raise important funds for the Julian Trust homeless night shelter.

The college’s first event saw five comedians, including Jeremy, tell their best tongue-in-cheek jokes while the students, with Alex, served up the food to a sold-out venue.

Amy said: “It was amazing to see so many new faces fill our restaurant! The event was a huge success thanks to the Belly Laughs team, Alex and the extremely hard-working students. The comedians had everyone laughing which was lovely to see and it really showcased the City Restaurant and what we can offer in the space and the skill of our students. We were all too happy to host this event and hope it will be the first of many, especially after we were able to raise more than £500 to support those in need.”

The event got off to a roaring success when Jeremy handed over the microphone to impressionist Luke Kempner, who tested out some new material on the diners. From Boris Johnson and Donald Trump’s interesting take on Brexit to the dulcet tones of David Attenborough description of a blossoming ‘bromance’.

It was then over to high-rated Bristolian comedian Mark Watson who, after spending 20 minutes trying to work out how to get into the venue, showed off why he has become a household name and a regular on TV panel shows such as Never Mind The Buzzcocks, Would I Lie To You? and Have I Got News For You.

After a short interval for dessert – a baked vanilla and ginger cheesecake with butterscotch sauce – it was then over to the final two comedians to bring the evening to a close. Priya Hall was all too keen to talk about her nan’s take on raising a child in the modern day and back in the ‘60s.

To close the show was straight-faced funny man Matt Rees whose quick one liners and anecdotes had the guests in fits of laughter with many wiping tears from their eyes.

But the evening would not have been completed without the food and the students, with Squeezed’s Alex Hayes, delivering an outstanding service.

Alex worked as a lecturer at the college for almost two years before leaving to become a stay-at-home dad. He later launched Squeezed, a very successful fast food burger place in Bristol’s new foodie quarter Wapping Wharf. He has received rave reviews while being back in the kitchen and revealed at the end of last year his plans to move to a larger unit on the same estate with more seating and the capacity for a bigger menu.

He said: “I never expected my burger combination to work – it is a tough gig and Bristol is a hugely busy market and a lot of good food places to go because of location, cost and competition. But I set out with Squeezed wanting it to succeed but not having too many expectations. Now we are in our third year and have been doing really well. We are expanding the team, taking on some new staff and this is going to be it for me. I set up Squeezed to cook and if it is a restaurant which will pay wages and produce good food then I am happy.

“It has been really good coming back to the college and I recognise a lot of people still – it is like getting the band back together again. It was lovely and the students are so receptive. Everything guests ate on the night was made by the students and they have been brilliant.

“Working with chefs like me will give them a diverse range of food they cook. They will get to explore different ingredients and different techniques you wouldn’t find elsewhere. The more chefs you work with the more you learn – it is one of those jobs you never stop learning.”

Find out more about the Belly Laughs programme and City of Bristol College’s gourmet dinner nights.