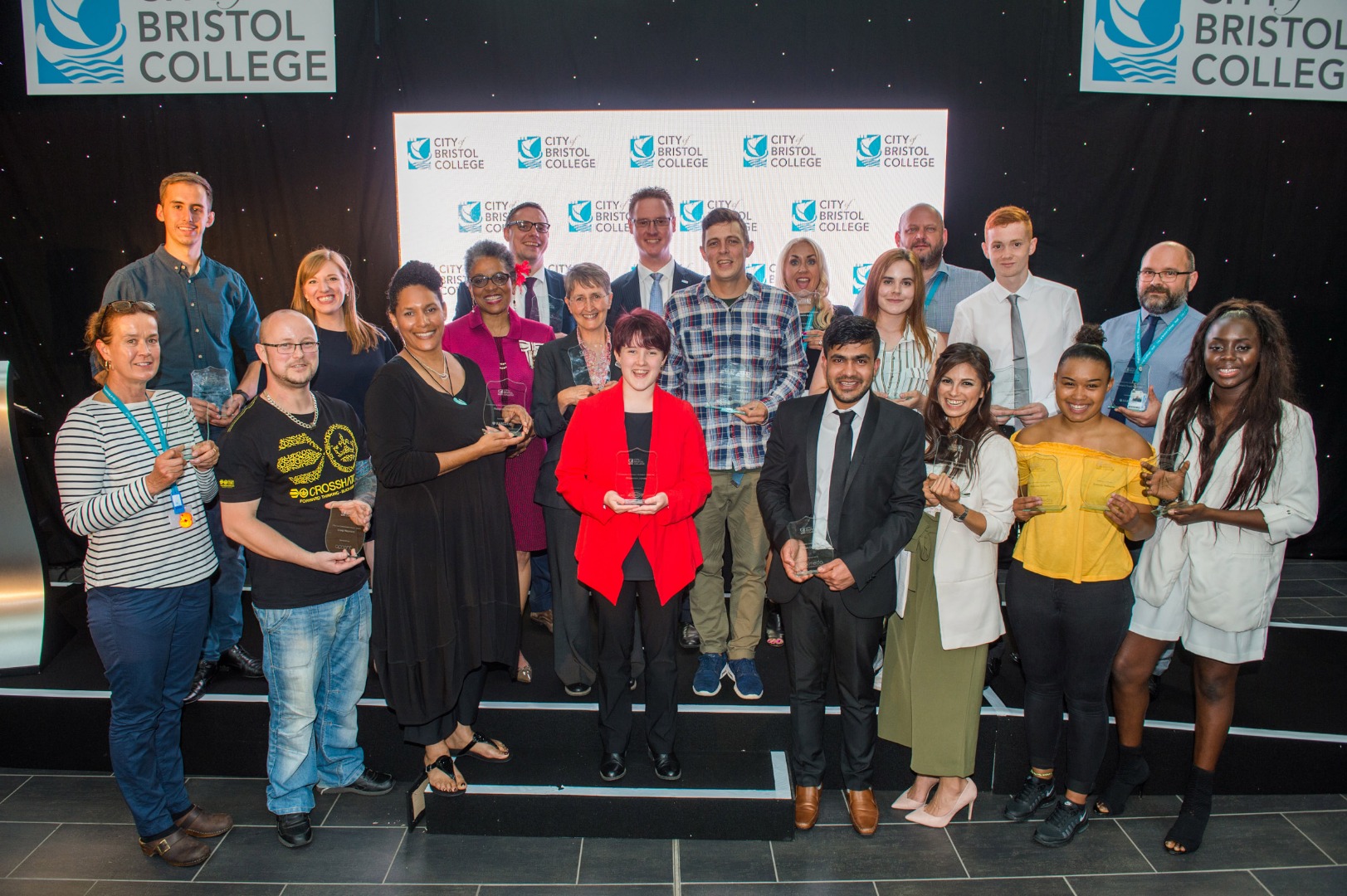 Mrs Peaches Golding OBE joined students, staff and the City’s employers at the prestigious annual celebration of students’ achievements, Student Awards Evening 2017/18. The event which was hosted by Jamie Breese, saw students and employers receiving recognition for the hard work, progress and contribution they made during the academic year.

Mrs Golding who was awarded the OBE in 2009 for services to minority ethnic people in the South West, became the first-ever black High Sheriff in England in 2010 and commenced the role of Lord-Lieutenant of the County and City of Bristol in April 2017. During the event, she delivered an inspiring keynote speech focusing on the importance of lifelong learning. She commented:

“Tonight is an exciting evening for everyone and I have great pleasure to celebrate these achievements with you. Your award is just a starting point because you’ve already demonstrated that you can learn. If you continue being curious and learning, there will be no limits to achieving your ambitions.”

“I am delighted that Mrs Peaches Golding OBE, Her Majesty’s Lord-Lieutenant of Bristol has been able to join us for this special celebration of success. Tonight’s event provides a great opportunity to reflect and demonstrate the College’s value of Pride, where we come together and celebrate the many and varied achievements of our students and partnership work with the City’s employers.

“This is not simply a journey of academic achievement, but also an acknowledgement of the individual journeys that have been taken to get to this point. Tonight though is simply a milestone in that journey each student makes towards their individual goal.  For some it will be university, for some work, for some learning at a higher level, for some an apprenticeship.

“Success is never achieved in isolation and tonight we are also able to acknowledge and thank those people who have supported our students during their time at the college. This includes the dedicated parents, carers, partners, children, employers and of course our team of skilled and professional staff, both teaching and support.”

Effort and Determination Award – Under 19s

Effort and Determination Award – Under 19s

Contribution to the Community Award – Under 19s

Contribution to the Community Award – Adults

Apprentice of the Year Award – Under 19s

Apprentice of the Year Award – Under 19s

Employer Partner of the Year Award

Employer Partner of the Year Award

Ben Aston, winner of the Contribution to College Life Award – Adults and the Principal’s Award, studied Vehicle Paint Repair Diploma Level 2. On starting at the college, Ben had no qualifications in English or maths and lacked confidence in reading, writing and maths abilities. The college’s Study Plus team set him up with support to aid his skills development, progression and confidence. Through his own life experiences, he inspired a number of younger students in class to take up additional support and is now showing real potential in developing his career. On winning his awards, Ben said:

“I wasn’t expecting to win and so to win two awards, including the Principal’s Award, was just amazing.

“I always wanted to study car body repair and at City of Bristol College, I’ve had a chance to do that, as well as improve many other skills along the way, such as English and maths.

“I’m now considering pursuing a part-time course in becoming an assistant teacher in the motor vehicle area because I enjoy helping others learn.”

Estony Roberts who studied Children’s Play, Learning and Development Level 3 was the second winner of the Principal’s Award and also took away the Outstanding Achievement Award – Under 19s. Described by her lecturers as an example of a model student who has continuously demonstrated integrity towards her studies, respect for her peers, pride in her work and ambition in her career aspirations, Estony has taken on the role as a mentor within her group. On winning her awards, she said:

“I’m overwhelmed to win these two awards but so happy that I’ve got them. I didn’t think I was going to win and it is exciting to know that my achievements have been recognised.

“My favourite thing about City of Bristol College is the course I’m doing. I love it and it’s definitely a career I want to pursue.”

Employer partners, DAF and Bristol Council, were also recognised for their ongoing collaborative work with the college.

The DAF apprenticeship programme has been running in partnership with City of Bristol College for the last 20 years, resulting in a series of accolades such as Ofsted ‘good’ grading as well as The Princess Royal Training Award for outstanding training and the Automotive Global Award. On winning the award, Adam Russell, Business Services Manager at DAF said:

“It’s a great honour to get the award and to continue our partnership with City of Bristol College. We’re really chuffed! It’s a bit of a surprise to win. I’ve just taken over the role of looking after the apprenticeship programme, so one week in it’s quite nice to win an award already.

“We’re continuing to grow the programme with City of Bristol College. This year we think we should have over 300 apprentices on the programme for the first time and we want to keep it growing.”

The second winner of the Employer Partner of the Year Award went to Bristol City Council. The college is proud to work with Bristol City Council in developing their workforce through a range of apprenticeships at intermediate, advanced and higher levels. On winning the award, Jane Taylor, Head of Service – Employment, Skills and Training said:

“It’s absolutely amazing. It’s a great surprise and an honour to be recognised in this way. Over the last couple of years we’ve worked increasingly close with the college to develop strategic plans so that our learners and the people we recruit have a good pathway to the college, to increase everyone’s opportunities.”