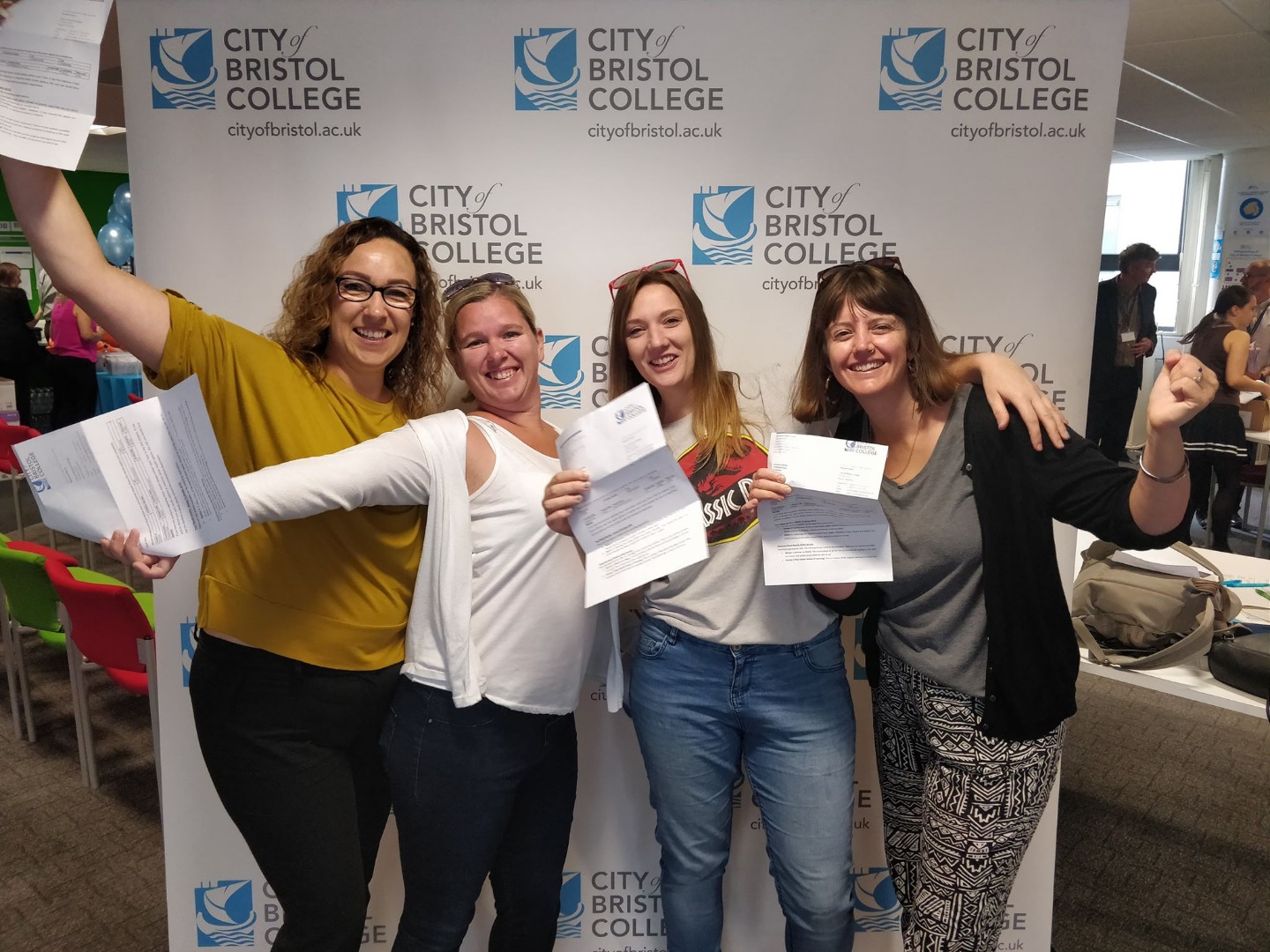 Springboard to get back into learning’ – students achieve fantastic GCSE results

City of Bristol College’s GCSE students were celebrating after scooping up a fantastic set of results, including some shining stars who achieved the top grades.

Yesterday saw the college secure its third consecutive year of improved results in GCSE English and maths as teachers and students in both subjects saw an increase in those earning the higher grades.

For some students it had been more than a decade since they had stepped foot in a classroom and for others it was time for a change of career. This was the case for 42-year-old Kevin Richardson who left behind his job in the hospitality industry to secure his English and maths GCSE.

He said: “I didn’t come in with a goal in mind, I just wanted to get my GCSEs under my belt. But now I have been back in the classroom I have really enjoyed it and I want to now progress to the next step. When I started at the college I was interviewed and my interviewer said she thought I was dyslexic – which explained a lot of my earlier struggles. The support I had from my tutors was brilliant, I cannot fault them.”

Today Kevin picked up two grade 5s (C/B) in English and maths and the aspiring paramedic said he was ‘really happy’ with the results he had earned as he prepares to return to the college next month to start his Access to Health and Social Care course.

He added: “All the hard work seems worth it now. It is a lot of work to compress everything into one year and doing it in addition to working alongside it but this is the icing on the cake. I can now go on and work towards university. The springboard of getting back into learning and getting the mind working in that way, that is going to be invaluable in doing the Access course.”

Neil Goodwin, Kevin’s English teacher, said: “I am very pleased with Kevin’s achievement and I always knew he would do it. He is going to move on to great things. He was always really focused and keen to learn – especially when he had the ‘light bulb’ moment, which was great to see.”

City of Bristol College’s Acting Principal and Chief Executive Richard Harris said: “Our young and mature students have achieved tremendously in this year’s GCSE exams. It is great to see the individual success stories, and it is also good to remember that whilst there is, of course, a lot of focus on 16-18 year olds, as a college we are here for lifelong learning and for Bristol’s mature students too, and that is equally as important. All these success stories are fantastic to hear.”

Postman, Daniel Hunt, aged 32, picked up his English Language GCSE result today and was blown away to see a grade 9 (A*) in his letter next to his chosen subject.

He had previously completed an English Functional Skills Level 1 and 2 course last year before conquering the GCSE course.

He said: “I don’t believe it, I was hoping for either a 6 or 7 as I had worked so hard and I was doubting myself. When I was 16 I just could not get my English, I wasn’t interested in school. When I went out into the world, it was always an obstacle I could never overcome.

“I am in disbelief. I’m not sure what I’m going to do next as when and that would be it, but now I really enjoy the course and I am considering potentially studying English further or I have always wanted to be a paramedic. I am so happy and proud and this has just made my year.”

Head of Department for English and ESOL, Becky Miller, said: “Today’s grade has changed how Daniel feels about himself and actually now he knows that he can do things he didn’t think he could. What phenomenal work he and the teachers have done to get that result. I am so proud and delighted that we can make such a difference to people’s lives.”

35-year-old Natasha Daniells picked up her maths GCSE results with her daughter Paige in tow. The mum had a beaming smile on her face after securing a grade 4 (C), which she needed to secure her spot on her adult nursing university course.She said: “I lost both my parents in the past five to six years to diabetes and cancer and seeing all the care they received and how it really helped having someone outside of the family help them made me want to do that for someone else. I worked at a care company for eight months which had inspired me to return to college to do an Access to Health and Social Care course around two years ago. That was the start of my renewed learning journey. ”It’s not too late to join City of Bristol College this September. The college is enrolling on all courses, whether you’re a school leaver or an adult. Drop in to your nearest centre Monday to Thursday, 8.30am – 6.30pm, Fridays, 8.30am – 4.30pm. Click here to see a full range of courses on offer.