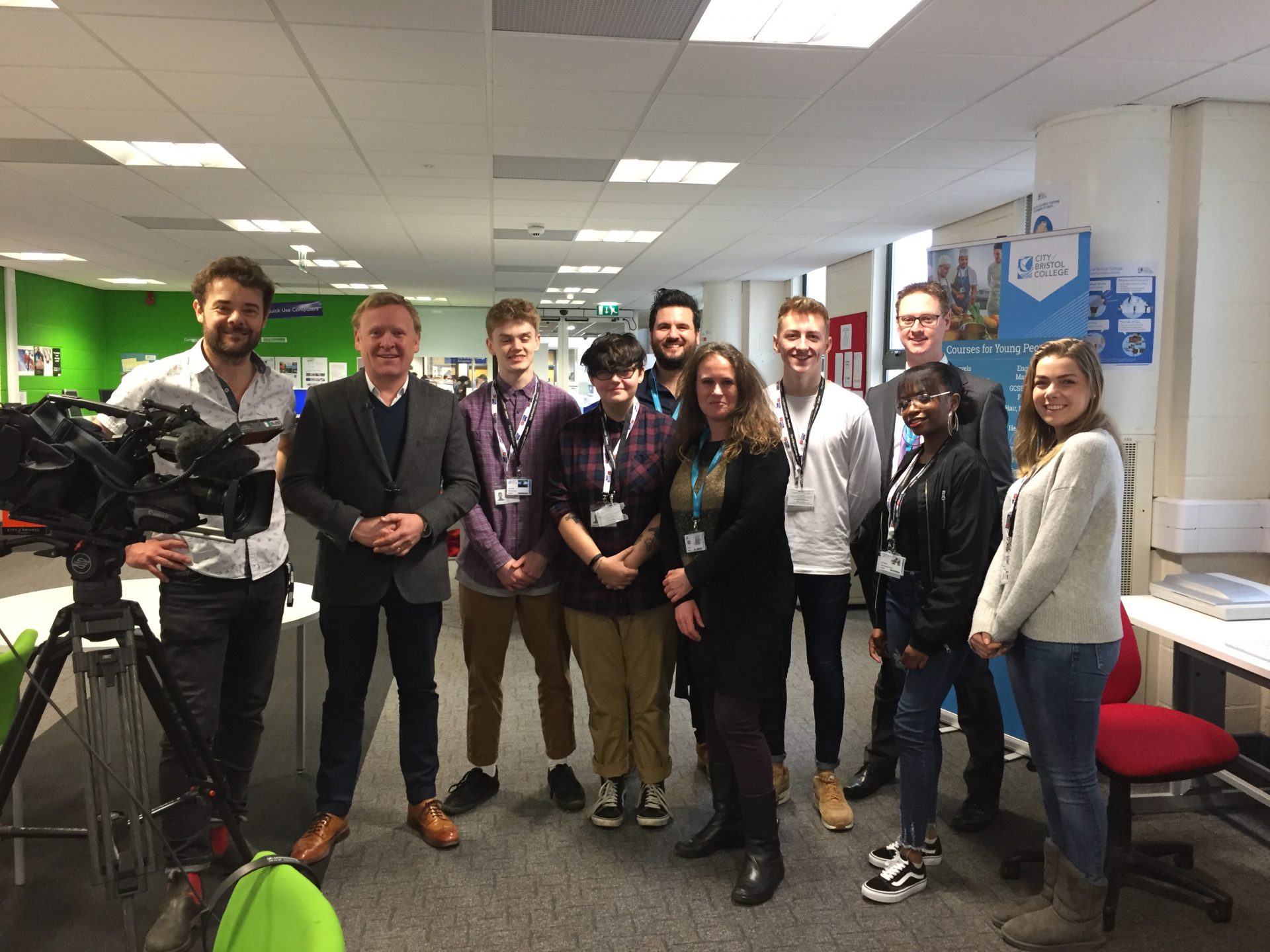 Five Level 3 Creative Media Production students at the College put their skills to the test thanks to a project by the Academy Award winning animation studio, Aardman. Their media game which the students helped to develop, aims to aid young people’s development of knowledge of how to spot fake news.

Ali Grant, media lecturer at the College and a former employee of the BBC was behind securing students’ involvement with this project. She commented: “For the first time in the 12 years’ history of BBC’s School Report Project, it’s been opened to 17 to 18 year olds this year. Having previously worked at the BBC myself for 15 years, I know what a fantastic experience it would be for our students and so I signed us up straight away, without realising the extent of the opportunities that were going to come their way.”

Students’ involvement with the project span over five months, starting in October during an introductory workshop in the Engine Shed. By January, students found themselves talking to Aardman about their opinions about the game whilst it was in production, as well as being mentored by Matt Pick, BBC Points West School Report about the importance of effective pre-production and legal and ethical implications of production decisions; all being the topics that students are studying on their course.

Student Chloe Collins Cole, aged 18 was involved in the initial and final game testing with Aardman, recorded the voiceover about the game for BBC Points West as well as interviewed by John Maguire on BBC Breakfast during the game’s launch. She said: “I felt extremely honoured and excited to take on the responsibility of presenting the BBC School Report piece on Points West, in addition to actually getting to go to BBC to help edit. With regards to Aardman, they couldn’t have been any more welcoming and supportive. They were an awesome group to work with, and the fact they actually took our ideas for the game into account is amazing. I loved helping out with the game and getting to meet the Aardman / BBC crew. Overall, it was a wonderful experience I will never forget.”

The BBC School Project did not only enable the students to practice their media related skills but also aided their understanding of the subject of fake news. Jana Smidkova, Director of Marketing, Communications and Customer Services at City of Bristol College, with the designated responsibility for safeguarding, commented: “The internet represents an opportunity for learning, connecting and sharing with people all over the world but in this day and age it also brings inevitable risks, one of which is fake news. At City of Bristol College we help our students not only to learn academic and practical skills for their future careers and employment but also develop their critical thinking to help them analyse and judge different situations, such as the truth and accuracy of stories and information available online. Thanks to the BBC School Report project, this group of students had a unique opportunity to gain work experience in their chosen field of study but also develop practical understanding of the subject of fake news.”

John Maguire concluded: “I know we’re talking about fake news, and the difficulties of having so many online platforms but students now have the potential, if they’ve got an enquiring mind, to be plugged in to sources of information that were never available to them ever before. It was great to meet them, I thought they all spoke very well, they thought about what they were going to say, they were polite, and engaged and it was a real pleasure to work with them and to meet them.”

If you’re interested in studying media at City of Bristol College, visit www.cityofbristol.ac.uk/courses or visit the College’s next Open Event on Thursday 17 May, 5-7.30pm at College Green Centre.